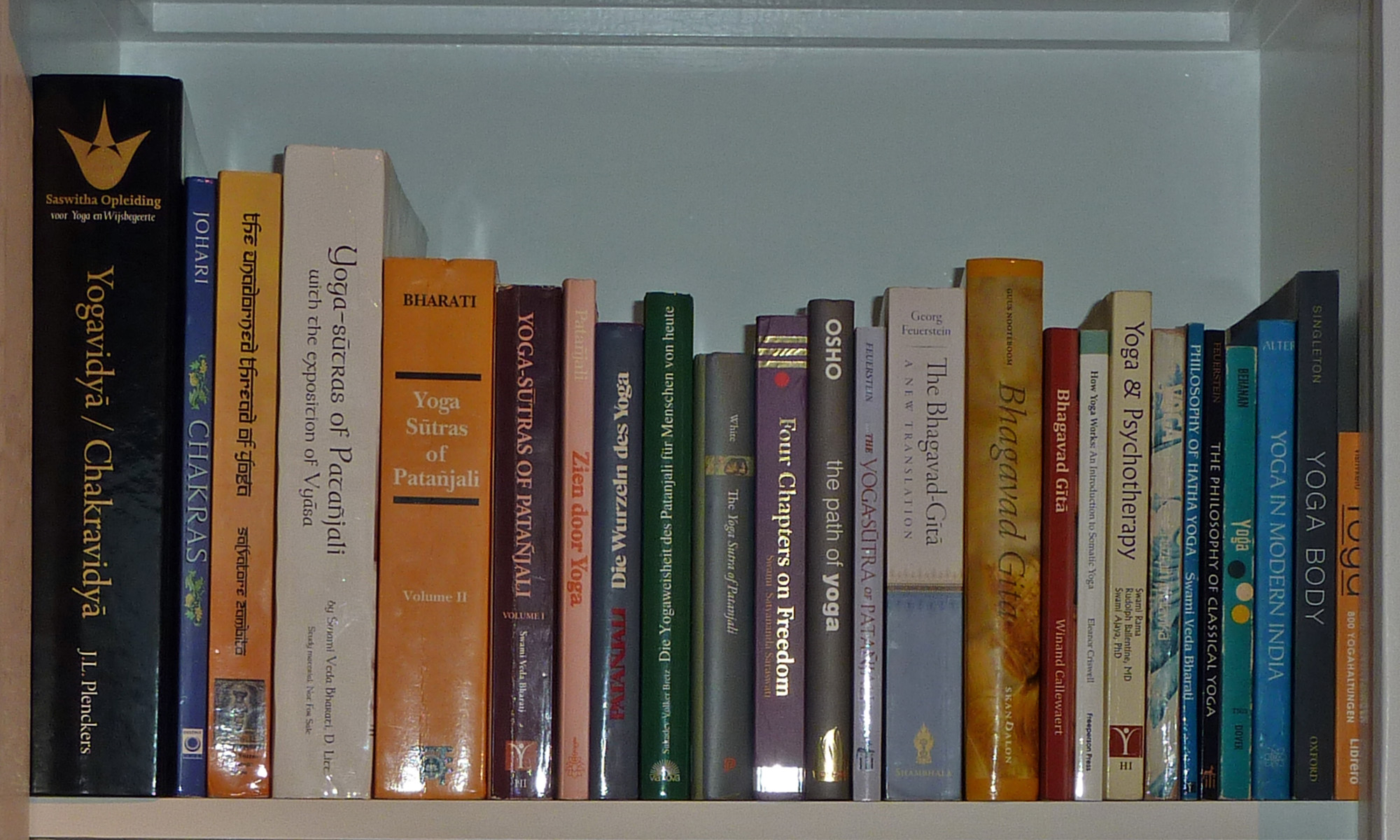 Did you already know that yoga has an ethics with important advice on how to live a good life? The ten basic principles of yoga-ethics are explained in this post and we eventually come to the question: What is yoga?

The classical eightfold path of yoga (aṣṭāṅga yoga, not to be confused with the popular Ashtangayoga) begins with ethics: five yamas and niyamas, respectively. These are words from Sanskrit, the ancient language of India. They roughly mean “self-control” and “duties”. They are explained in, among other places, the Yogasūtras of Patañjali, a philosophical treatise which probably originated in India before 400 CE.

Non-violence – or also: non-damaging – is right at the beginning of the list. Some commentators argue that all other ethical principles of yoga can be derived from ahiṃsā. It is indeed easy to understand how lying, stealing, lack of sexual restraint or possesiveness can cause damage and suffering to yourself or others.

The principle of non-violence probably originated in Buddhism and Jainism more than 2500 years ago and then influenced Hinduism and India’s major philosophical schools – and thus also yoga. Until today yoga practitioners around the world refrain from eating meat, fish, or even all animal products, to avoid unnecessary suffering.

Truthfulness and non-stealing probably do not need much of an explanation. An important aspect is, though, that they are not absolute. If, for example, significant suffering can be prevented by breaking them, then this would probably be in line with yoga ethics. But you should critically ask yourself how likely the suffering really is to occur and whether you are not just deceiving yourself to justify a transgression out of egoism or comfort.

What I called here “sexual restraint” is translated by others as “chastity” (Jogchum Dijkstra) or “pure moral conduct” (Bettina Bäumer). Regarding this principle, there is no clear line in the commentaries: Some write that absolute sexual renunciation is essential to reach certain levels of self-development; others primarily consider unfaithfulness or sexual excesses as problematic.

Non-possessiveness is primarily about not being possessed by material things. “The more I posses, the more I am possessed” (quoting Nietzsche freely). You thus do not have to live like a beggar when treading on the path of yoga. But those who are permanently concerned with their financial investments, that scratch in their car, or the next fashion collection are probably lost too much in the mundane and in that which is alien to oneself. Is this the reason why we are on earth?

When you are dealing with yourself in a deeper sense then the other and alien is rather distracting. In regard to this, yoga teaches restraint which can be expressed on many different levels: for example, owning less or eating less or having less sex. The concept of “pratyāhāra” which means withdrawal of the senses is expressing this very well. That is the fifth aspect of the eightfold path. But I shall write more about this on another occasion.

Cleanliness does not only refer to taking care of the body, thus outer hygiene, but also the purity of thought. Hatred and aggression, to name just two examples, distract from the path of yoga and probably also from the essence of your own life. But also the place where you are performing your exercises should be clean and tidy.

Contentment (“inner rest” according to Bettina Bäumer) primarily means that you do not always want to have more than you already have. The link to non-possessiveness here is obvious. On the yogamat this can mean, very concretely, that you accept your possibilities and limitations.

Those who are focusing too much on a certain aim, such as being able to sit in the lotus (padmāsana), will probably not just judge themselves, but perhaps even take the risk of damaging their bodies. Remember ahiṃsā (non-violence) as the first principle! Then it becomes obvious why you should be satisfied with yourself, without becoming too flabby. Thus already the next niyama:

I chose self-discipline (“asceticism” according to Bettina Bäumer) here as a translation for “tapas”. This does not refer to Spanish appetizers, but originally to heat. Jogchum Dijkstra thus translates it as “fiery commitment”. Exercises such as fasting, standing in the burning sun, hard work, or being in silence played an important role on the path of yoga.

For me it means to exercise yoga with fiery passion. The flame can sometimes burn weaker or stronger – remember ahiṃsā (non-violence) and santoṣa (contentment) –, but it should never extinguish completely. Do not be obsessed by an aim, but don’t forget your own path either.

The philosopher and former Indian president Sarvepalli Radhakrishnan (1888-1975) derives the meaning of “tapas” from the warmth that lets a chick grow in its egg and eventually hatch. If this warmth is completely absent, then there is no more growth.

Self-study can be understood in two different ways: On the one hand to study philosophical texts, on the other hand to investigate yourself. Know thyself! Saswitha (Jan Rijks, 1901-1988), the founder of my yoga teacher training in the Netherlands, kept repeating: “One ounce of experience is more important than a ton of knowledge!”

In my experience, it does not only depend on someone’s personality but also on the circumstances which form of self-study will be the most beneficial. For those lacking inspiring teachers in their vicinity, for instance, studying the texts can be the most important source of growth and development. Such a focus on old texts could also lead to escapism, though, which prevents transformative experiences from happening.

The fifth en last principle, īśvarapraṇidhāna, is for me the most difficult to explain. Literally it means: directing your attention on Īśvara. Thus who or what is Īśvara? The word can mean “God” – but also pure consciousness. I decided to use the more neutral term “contemplation“.

According to one theory, the more religiously sounding passages, thus those dealing with God, have been added later to the Yogasūtras, namely by Hindus who wanted to adapt the philosophical work to the then prevailing morals and customs. But one can also understand the concept – the fifth Niyama – in a more meditative sense. Let me explain that with respect to one of the (for me) most important places in the Yogasūtras, with which we can at the same time answer the question what yoga is:

The posture should be stable and comfortable.
Through relaxed strain and becoming one with the infinite
one becomes insusceptible to the pairs of opposites. (YS 2.46-48)

The first sentence is probably one of the most famous of the Yogasūtras – and actually the only one in the whole treatise referring to the body posture. Handbooks for yoga exercises such as we know them today have been written much later (such as the haṭhayogapradīpikā). “Posture” (āsanam) can actually be just sitting.

Thus when you take a stable and comfortable position then you should direct your attention on the infinite in a state of relaxed strain (Jogchum Dijkstra), eventually becoming one with the infinite. Note that “yoga” is often translated as “union”. The paradoxically sounding “relaxed strain” probably arises when you combine tapas (self-discipline) with non-possessiveness and contentment. The text thus refers to a state of deep contemplation about which I shall write more another time.

When you get into this state, then, according to the Sūtras, you become insusceptible to the pairs of opposites, such as warmth and cold, humidity and drought, pain or pleasure. I think that this generally means withdrawal from the permanently changing nature (prakṛiti): You become as solid as a rock in turbulent waters and let yourself be distracted by neither a storm outside nor within.

By the way: Thoughts are often considered a part of nature in Indian philosophy and are thus opposed to the unchangeable Self (puruṣa). This nature/Self dualism plays an important role on the yoga path. But this is also topic for another time.

Let us return to the Sūtras: You become one with… what, actually? The ineffable. Those who are getting closer to this state experience an inner peace in which time seems to stand still.

We thus come to better understand the definition of “yoga” offered to us right at the beginning of the Sūtras:

Yoga is the control of the stream of consciousness. (YS 1.2)

Or in the translation by Bettina Bäumer:

Yoga is that inner state in which the mental-psychological processes come to rest.

I wish all of you this state. Svāhā. So be it.

I can recommend the following editions of the Yogasūtras for further self-study: